Early last week an old friend reappeared out of the fog with an amazing piece of plant material he had been watching for the past 12 years.  High in a Redwood tree (Sequoia sempervirens) there had been growing a white branch and through binoculars he could tell that it was pure white but it was un-reachable.  As a result of the ice storm we here in the Puget Sound region suffered, this branch, and it was a large one, was delivered to his door step and he was able to see it close up.  He says he thought of me and "if anyone could propagate this it would be you."  (His words, not my bragging!) 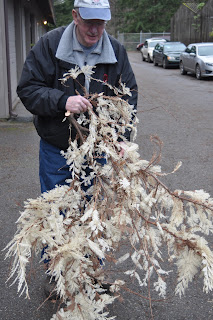 Well, I thought, the conifer people would go crazy over this and I could be a millionaire if I can produce a bunch of these!  Of course plants completely lacking chlorophyll are very unlikely to root as cuttings, in fact the chances are zero, so the only thing to do is graft some onto another redwood rootstock or....find some suckers growing from a burl which are reportedly easy to root and nurse graft those.  My friend John, shown above, happened to have a young suckering redwood in his garden and brought me all the cuttings from it that he could get and they look like this: 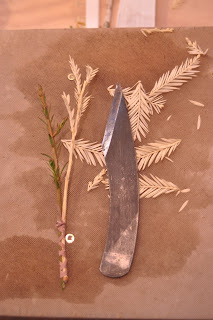 I don't know how likely they are to take but it sure would be great if they did!  Time will tell....think I'll go have a single malt! 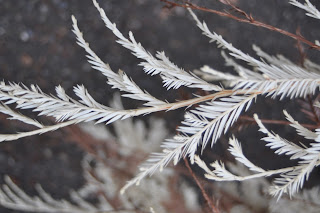 December 21, 2011
Finally, a little time off coinciding with good weather. Actually, it has been a December conspicuously devoid of rain for the Northwest, but anyway, it is time for a little garden clean up and first on the list is to clean up all the remaining apples. Somehow, and I'm always slightly ashamed to say so, but there are always apples left unpicked. Our two trees are small and this family loves to eat apples but it seems like every year there are lots of apples that go to waste, so instead of letting them rot and be a reservoir for pestilence and disease I go pick pick them and get the fallen from the ground for the compost pile. As I pick the bird-pecked, half eaten hangers on I find there are many that look good and firm which a quick polish on my sweat shirt and a cautious bite confirms. In fact, having weathered several significant frosts I find them particularly sweet and crisp, as delightful as the Winter Solstice day when I finally harvested them, what a nice surprise. Surely they will not last long in storage but we can feast on them while they last! Happy winter gardener!
Posted by The Well Potted Gardener at 12:54 PM No comments: 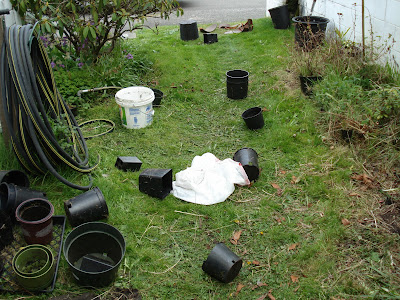